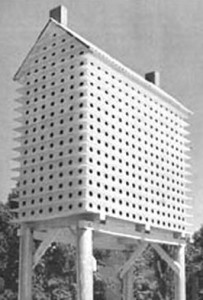 You see here a birdhouse with a bunch of holes that pigeons can enter to build their nests. Our current day is filled with those who like to quickly assign people to theological pigeon holes. Then they can neatly dismiss them as: Calvinists, Millenialists, Charismatics, Sabbatarians, Universalists, or where more focused on denominational divisions as Lutherans, Presbyterians, Catholics, Pentecostals, Baptists, Adventists, Nazarenes, Anglicans, Wesleyans, Congregationalists, Amish, Methodists, Mennonites, Episcopalians, and the list can go on and on with hundreds of variations, including one of their favorites: Fanatics.

Yet, very few people really know what foundationally differentiates the various positions. And even fewer consider that no one fits tightly into any one designation but are rather a combination of positions. The reason for pigeon-holing is counter to reason itself. It makes no sense other than it allows one to be comfortable within one’s own sphere of understanding; which, if you have a grasp of post-modernism, allows one to comfortably dwell in the reality of one’s own making.

Theological pigeon-holers consist of people skilled at avoiding issues. There are two main classes of pigeon-holers.

You can identify pigeon-holers by their constant use of slogans or one-liners to describe a person or that person’s position. To pursue anything of depth is foreign to them.

Pigeon-holers throughout the centuries have been instrumental in destroying the interactive dialogue among Christians. This leads to stagnation and dull Christians who are not battle-hardened to meet the critical issues head on. Instead, they will keep up the pressure to maintain ignorance so that the possibility of developing a culture of exhortation is rendered an impossibility.

This leads the church and Christians vulnerable to settling for the traditions of church culture as their guide rather than the scriptures themselves. This cancer has critically spread and now permeates the organized churches of today. This renders those in these churches less and less able to defend the faith.

And he said unto them, Full well ye reject the commandment
of God, that ye may keep your own tradition. Mark 7:9

By design, this has created a vacuum to which Satan has eagerly found ingenious ways to fill.

What do pigeon-holers need to do?

What can happen if you engage in these issues rather than dismissing them through pigeon-holing?

And it came to pass, when he made mention of the ark of God, that he fell from off the seat backward by the side of the gate, and his neck brake, and he died: for he was an old man, and heavy. And he had judged Israel forty years.

And he said, A certain man had two sons: And the younger of them said to his father, Father, give me the portion of goods that falleth to me. And he divided unto them his living. And not many days after the younger son gathered all together, and took his journey into a far country, and there wasted his substance with riotous living. And when he had spent all, there arose a mighty famine in that land; and he began to be in want. And he went and joined himself to a citizen of that country; and he sent him into his fields to feed swine. And he would fain have filled his belly with the husks that the swine did eat: and no man gave unto him. And when he came to himself, he said, How many hired servants of my father’s have bread enough and to spare, and I perish with hunger! I will arise and go to my father, and will say unto him, Father, I have sinned against heaven, and before thee, And am no more worthy to be called thy son: make me as one of thy hired servants. And he arose, and came to his father. But when he was yet a great way off, his father saw him, and had compassion, and ran, and fell on his neck, and kissed him. And the son said unto him, Father, I have sinned against heaven, and in thy sight, and am no more worthy to be called thy son. But the father said to his servants, Bring forth the best robe, and put it on him; and put a ring on his hand, and shoes on his feet: And bring hither the fatted calf, and kill it; and let us eat, and be merry: For this my son was dead, and is alive again; he was lost, and is found. And they began to be merry.

For the time will come when they will not endure sound doctrine; but after their own lusts shall they heap to themselves teachers, having itching ears; II Timothy 4:3

Hermeneutics is the science of interpretation, especially of the Scriptures. Those with a formal Biblical or Seminary education will tend to use the hermeneutics term to describe their pigeon-holing skills. In the strict sense, it is a misuse of the word, but sounds impressively intelligent.